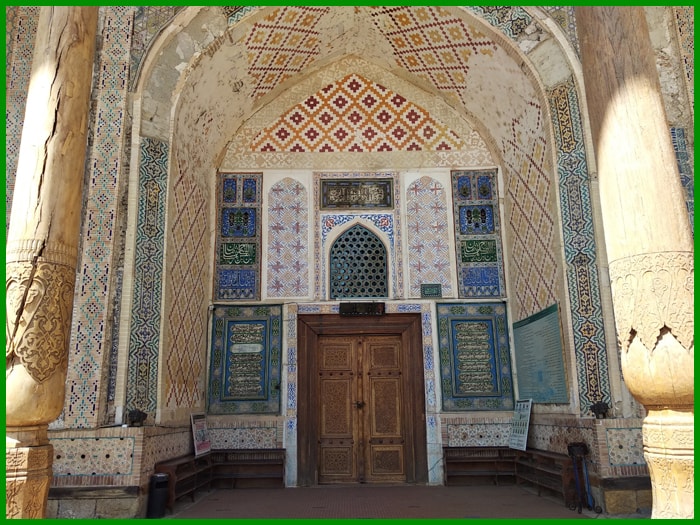 The name of the tour: Pearls of Uzbekistan

Day 1: Tashkent - Urhench - Khiva (morning flight)
Today after arrival you will meet your guide at the airport and after you will fly to Urgench, departure to Khiva. Today you will have amazing tour where you will discover amazing sights in one of the ancient cities of Uzbekistan. You will explore Ichan-Qala, the inner city in Khiva.  . Within these borders, Khiva was located in the XVI-XVII centuries and was surrounded by a powerful clay wall, the length of which was more than 2200 meters, the height of more than 7 meters. Around the perimeter of the wall were fortified semicircular towers. At the top of the wall was a pointed gallery with loopholes and battlements. The fortified walls of Ichan-Kala provided reliable protection of Khiva until the invasion of the Iranian troops of Nadir Shah in the middle of the XVIII century. One of the most fascinating landmark will be the Kunya-Ark fortress dating back to 17th century, Kalta Minor minaret and Tash Khouvli palace. You will spend the night in the hotel.

Day 2: Khiva - Ayaz Qala - Toprak Qala - Khiva
This day you will amaze two fascinating fortresses: Ayaz Qala and Turpak Qala. Ayaz Qala is one of the most spectacular fortresses in Khorezm. It is a complex of three fortresses grouped around an elevated hill on the Eastern side of the Sultanuizdag range. Tuprak Qala was a fairly large settlement that existed on the plain near the slopes of Sultanuizgad in the I-IV century ad. The remains of this ancient city were discovered in the summer of 1938. Then you will transfer to Khiva. The night will be in the hotel.

Day 3: Khiva - Bukhara
After breakfast you will transfer to fabulous city Bukhara. It consists of 140 unique architectural buildings that made Bukhara a "town museum" dating back to the Middle Ages. In Bukhara you will find more than a hundred ancient monuments, narrow streets, the majestic Ark fortress, which served as the residence of the Bukhara rulers, and the charming atmosphere of the old city. All of them were built at different times, and had a significant impact in history. This day you will transfer through amazing Kizilkum desert. Along the way you will be amazed by the largest river in Central Asia Amu Darya river, The origins of this great Central Asian river lie, strictly speaking, outside the CI. After you will come to Bukhara and have free time. You will spend the night in the hotel.

Day 4: Bukhara
This day you will have an adventure in the enchanting city Bukhara. You will visit the ancient Citadel Ark, which rises in the middle of the Central square and dates back to the 4th century BC. After you will be amazed by the unsurpassed art form of the 9th-10th century  Samanids mausoleum. Next you will get to amazing site to Chashma Ayub, its architectural structure is made in the form of a rectangular building with a Suite of 4 rooms. Each of which was built at different times, it is also called the source of Job. After you will explore the the shopping domes and walk along them, you will also discover another unique sight famous madrasahs Nodir Divan Begi which was built by decree of the court vizier Nadir-divan-Begi in 1620 and was part of the famous ensemble "Lyabi-Hauz". You will continue the tour with amazing Poi Kalon complex, the masterwork of architectural art of Bukhara. The structure includes three constructions built in the 12th - 16th centuries: Kalon minaret, Kalon mosque and Mir Arab Madrasah. You will rest night in the hotel..

Day 5: Bukhara - Samarkand
Today you will travel by a morning train to Samarkand. One of the oldest cities in the world, founded, according to archaeological data, in the VIII century BC. The center of the historical region and state of Sogdiana. For more than two thousand years, the city was a key point on The Great Silk Road between China and Europe. You will explore the fascinating sites such as Registan square, Shakhi-Zindeh, Mausoleum Guri Emir and Bibi Khanum Mosque. Samarkand square is the most famous Registan due to the famous architectural ensemble of the XV-XVII centuries located on it. You will visit architectural complex of Shakhi-Zindeh, this is one of the most impressive memorial complexes of Islamic architecture of the XIV-XV centuries. The complex is a huge burial place of representatives of the nobility of the Temurid times. Bibi Khanum Mosque one of the largest and most significant religious monuments in the Islamic world, and certainly the largest mosque in all of Central Asia. The night is in the hotel.

Day 6: Samarkand
This day you will also discover the surroundings of the amazing city Samarkand. Along the tour you will experience Ulughbek observatory, one of the most significant observatories of the middle ages, built by Ulugbek on the Kuhak hill in the vicinity of Samarkand in 1424-1428. Muhammad Taragay better known as Ulugbek ( ("Ulug" - the great, "Bek" - the ruler) grandson of the famous Tamerlane, was born in 1394. In addition you will marvel along the Local Broadway that stores souvenir shops, teahouses, sweets and workshops. You will also explore the oldest and largest bazaar Siab. You can buy here Uzbek traditional handmade products and local sweets. You will visit carpet factory, one of the most significant sights of Uzbekistan, which makes it possible to follow the work of skilled craftsmen creating handmade carpets in real time. To complete the tour you will visit Samarkand paper workshop where they produce silk papers. The overnight is in the hotel.

Day 7: Samarkand - Tashkent (transfer or train)
After breakfast you will have an unsurpassed tour in the capital. You will have a transfer or train to Tashkent. This day you will walk along the main Independence square and discover the interesting landmarks. You will lead to the local Broadway, where you can have a shopping and buy souvenirs or paintings. The tour will offer you to discover the old part of the city which includes: Chorsu Bazaar, Kukaldash Madrasah and Hast Imam complex that consists of several madrasahs, mosques and mausoleum. One of the brilliant highlights will be is the Othman Quran it is the primary source of the sacred book in a binding written on the skin of a deer in the middle of the VII century. The night will spent in the hotel.

Day 8: Tashkent - Chimgan Mountains - Tashkent
After breakfast you will have a journey to Chimgan Mountains. After arrival to the amazing place you will take a ride in a chair lift to get to the top where you will observe Beldersay peak 30 min one-way. In the tour you will admire the pristine nature, breathe fresh air, walk and discover the incredible landscapes. Along the way you will visit Charvak lakeside beach for free time and own water activities (as per season). Charvak this is a favorite place for summer holidays for all Uzbek citizens. According to local custom, every resident comes to this place at least once a year to relax from the summer heat of the city. Then you will be transferred to Tashkent. Your night will be in the hotel.

Day 9: Flight
In the morning is transfer to airport.