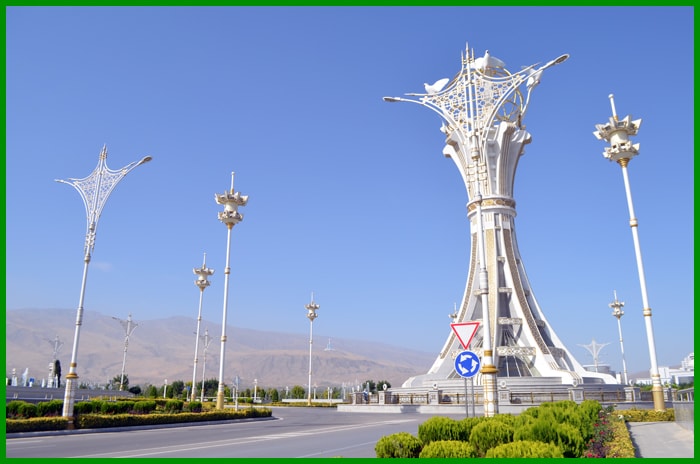 The name of the tour: Turkmenistan wanderer

Day 1: Ashgabat
After arrival you will meet your guide at the Ashgabat International Airport. Then you will have a wonderful city tour of the white marble capital. The city Ashgabat with a population of about 900,000 people, which became the Guinness world record holder for the number of white marble buildings in 2013. This beautiful capital, as well as a mixture of elements of Eastern and European architecture, make the capital one of the most magnificent cities in Central Asia. In course of the tour you will have a chance to experience Lenin's square, Park of Independence (looking like a white-marble "Eiffel Tower" standing in a beautiful park), Arch of Neutrality. In addition you will fascinate Museum of Ethnography and Museum of Fine Arts. The night is in the hotel.

Day 2: Ashgabat - Merv - Mary
After breakfast you will lead to the east of Turkmenistan to visit fortress Abiverd and Ancient Merv. Abiverd was an impregnable fortress that saved the citizens from the raids of nomads. The ruins of the medieval settlement of Abiverd are located in the middle of the road between Ashgabat and Mary. You will also have a chance to observe the ruins of the 15th century Seyit Jamal-ad-Din Mosque. Merv was one of the oldest cities in Central Asia. It is located near the city of Bayramali and is part of one of the oldest civilizations - Margiana. In course of the tour you will discover: Gyz Gala, Erk Gala, Soltan Gala, Soltan Sanjar Mausoleum, Ibn Zeid Mausoleum. After you will head on to Mary. Night will be in the hotel.

Day 3: Mary - Ashgabat - Darwaza
This day you will start a tour to the airport and transfer to Ashgabat. After landing you will move to the North of Turkmenistan, you will find the village named "Bahardok", today you will have a chance to get acquainted with the traditions and customs of Turkmen people and know the history of the country, you will also see their lifestyle. Then you will lead to Darwaza Gas deposit. Darvaza is one of the most striking sights of Turkmenistan. A gas crater in the center of the desert has been burning for more than 40 years and illuminates the night sky with a fiery glow. In 1971, geologists discovered a large accumulation of gas here. And for the past 40 years, the gas crater has not stopped fading. You will observe the fantastic views from the gas crater. Your night will be in the tent.

Day 4: Darwaza - Ashgabat - Nisa - Horse farm - Ashgabat
This day you will transfer to the capital Ashgabat. In course of the tour you will discover Nissa fortress. 18 km to the West of Ashgabat rise the ruins of Nisa - the capital of the ancient Parthian state that existed at the turn of the I thousand BC - 1 thousand AD in the III century BC, New Nisa was the capital of the Parthian state, and the Old Nisa fortress was a Royal residence. Then you will move to the fascinating place horse-farm where you will discover priceless treasure of the nation Akhal-Teke horses. You will drink Traditional Tea party, and admire the real masterpiece short Akhal-Teke horse show program. After the excursion you will drive to the hotel for overnight.

Day 5: Flight
In the morning is transfer to airport.