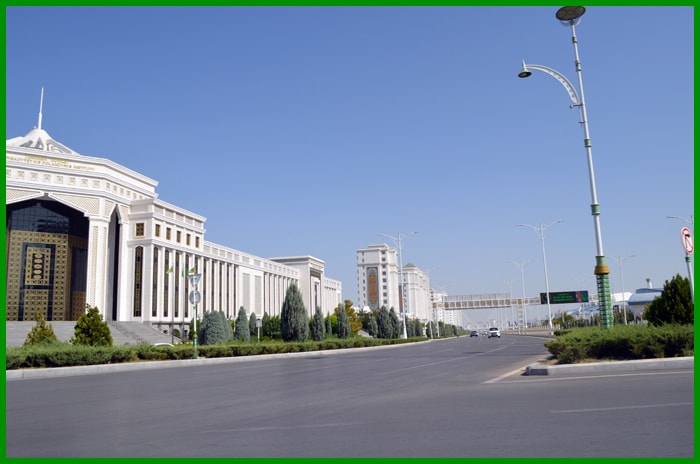 The name of the tour: Turkmenistan highlights

Day 1: Ashgabat
Upon arrival to the Ashgabat International Airport you will be picked up by your guide. Then you will head to the hotel. In the second part of the day you will transfer to visit the precious pride of Turkmenistan the Horse-farm - Akhal-Teke horses. These fast and hardy horses were born about 5000 years ago. You will have traditional tea break, and fascinate short Akhal-Teke horse show program. After excursion you will be driven to the capital and disocver the major spots of the city. Night will be in the hotel.

Day 2: Ashgabat
Today you will discover the striking landmark "Old Nisa"- once the capital of the famous Parthian Kingdom that existed from the third century BC to the third century AD, the Historical complex includes two archaeological sites - Old and New Nisa. Then you will visit "Gypjak" Mosque and Mausoleum of the late President of Turkmenistan. In tour you will be offered to visit the State Museum of History. It keeps the precious artifacts which were opened in places such as Nisa, Merv and Gonurdepe, ancient Turkmen carpets, rare examples of national clothing, jewelries, and antique weapons. The 9 halls display figurines of Athens, Eros, silver gilded griffin, horn-shaped ivory vessels-rhytons of the Parthian era, gold jewelries, medallions-stamps from Margiana and Buddhist artifacts. It stores fossilized piece of wood of the Paleozoic period, aged 270,000,000, dinosaurs' footprints, an 820-kg meteorite fallen in Kunya-Urgench in 1998. You will rest the night in the hotel.

Day 3: Ashgabat - Merv - Mary
In the early morning you will direct to discover the East of Turkmenistan, where you will reach Mary region. You will explore ancient Merv (Historical Park under UNESCO protection) - the oldest city in Central Asia, which stood on the Bank of the Murghab river in the South-Eastern part of Turkmenistan, 30 km West of the modern city of Mary. The capital of the Persian satrapy of Margiana and the Seljuk state. You will discover today: Gyz Gala, Erk Gala, Soltan Gala, SoltanSanjar Mausoleum, IbnZeid Mausoleum. After that you will transfer to city Mary. The  night is in the hotel.

Day 4: Mary - Talkhatan Baba - Yekedeshik Caves - Mary
The adventure will show you today Talkahatan Baba Mosque. An unusual mosque that dates back to the XI century. The mosque is almost a regular rectangle; there are no traditional canopies, but columns. Then you will continue tour with  Yekedeshik Caves. You will explore the significant Tagtabazar is the Ekedeshik cave settlement in the sandstone hills north of the town. The Ekedeshik labyrinth consists of numerous corridors and cave dwellings, which in Turn are united by a semi-cylindrical vault. 'Ekedeshik' translates as 'single entrance'. Not far from this cave are several another smaller cave complexes including one known as Bashdeshik ('Five Entrances'). After exploration you will drive to Mary city.  You will rest the night in the hotel.

Day 5: Mary - Margiana (Margush) - Mary
This day you will transfer to Margush. In course of the tour you will explore the 5th center of civilization. Margiana is a historical region centered on ancient Merv. Margiana was one of the satrapies of the Achaemenid Empire mentioned in the Behistun inscription. It was named after the main city - Merv. Corresponds to the territory of Eastern Turkmenistan. The ruins Of ancient Merv are adjacent to the North-Eastern edge of the resort town of Bayramali, located 25 km East of the velayat center of Mary in Turkmenistan. In Oriental studies, Merv is not just an ancient city, but a whole historical oasis along the Murghab river, which originates in the Paropamiz mountains and forms a fertile valley on the border with the Sands of the Karakum desert, which is mentioned with admiration in ancient and medieval written sources.  After you will transfer to the hotel for overnight.

Day 6: Mary - Ashgabat
The tour route will take you to Ashgabat. Along the way you will break at Annau, and disocver the ruins of the 15th century Seyit Jamal-ad-Din Mosque, Abiward or Abi-ward. In ancient times, Abiverd was one of the major centers of Northern Khorasan, repeatedly mentioned in written sources and is one of the eight historical reserves of Turkmenistan, along with Keneurgench, Nisa, Merv, and Dahistan. In the second part of the tour you will have an opportunity to explore Russian Bazaar here you can buy food, drinks, and Turkmen souvenirs, clothing, and household goods. The night is in the hotel.

Day 7: Flight
Night transfer to the Ashgabat International Airport to board a flight to next destination.