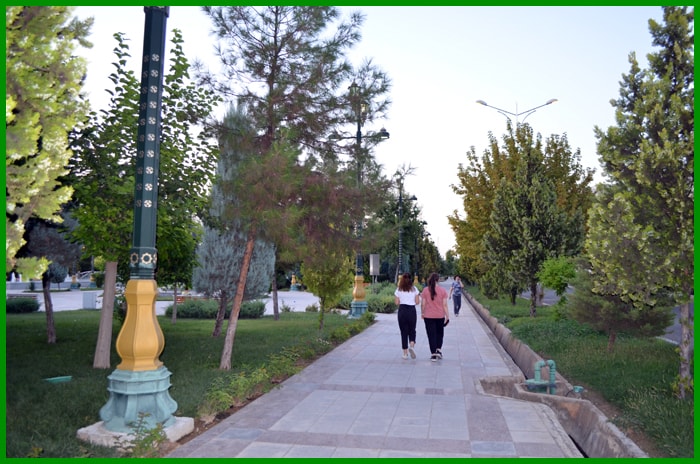 The name of the tour: Discovering Fiery mountains tour

Day 1: Ashgabat
After meeting at the international airport. You will check in the hotel and have free time till the evening. You will have today free time.

Day 2: Ashgabat - Turkmenbashy
This day you will have a journey to the interesting attraction of Turkmenistan Nisa the ancient settlement of Parthians. An ancient medieval city in the foothills of Kopetdag, near the modern village of Bagir, now consists of the ruins of two ancient settlements: New Nisa and Old Nisa. The earliest traces of human activity on the site of New Nisa date back to the IV-II Millennium BC. In the I Millennium BC, there was already a fairly large settled settlement here. According to legend, during the time of Darius Hystaspes (VI century BC), the settlement became a border fortress that blocked the path of invading warlike nomads from the North.  Then you will continue tour with the Ertogrul Gazi mosque. One of the most beautiful mosques in Ashgabat, built in the Turkish style, is the largest in the city. The mosque has four minarets. The mosque accommodates about 5,000 people. In the afternoon you will discover the carpet museum where you can fascinate the beauty of the mesmerizing collection of carpets of different periods. Then you will head to the Russian market. After exploration the Russian bazaar you will take a train to the Turkmenbashy region. You will spend the night in the train.

Day 3: Turkmenbashy - Yangykala
After breakfast at the local restaurant. You will transfer to the interesting creation of the nature  the Yangykala fire fortress. Yangykala - scenic canyons, East of the Gulf of Karabogazgol. 165 km away. North of Balkanabad and 160 km East of Turkmenbashi is one of the most beautiful natural creations of Turkmenistan - the Yangykala canyons. Translated from Turkmen, the phrase "Yangi Kala" means "fire fortresses". Steep cliffs of white, yellow, ochre, purple and red colors, whimsically carved by winds and rains, are very similar to stone castles from some fantasy. The canyons are especially beautiful at sunset, when everything around turns fiery red. After trying the tea and enjoying the fabulous views of the Yangykala.  You will direct to the pilgrimage spot Gozli Ata where you can observe the method of Turkmen traditional. Then you will transfer to the hotel for overnight.

Day 4: Turkmenbashy - Ashgabat
After breakfast you will transfer to observe the Kamil Ata sacred and nature place, there you will have a chance to overlook the huge stones. These stones looks like Giants.  Then you will return to the city. You will catch the train to Ashgabat. Night will be in the train.

Day 5: Ashgabat
After arrival to Ashgabat by train. You will drive to observe the horse farm where you will have a chance to feast your eyes upon amazingly charming pride of Turkmenistan Akhal-Teke Horses. Such riding horses were bred more than five thousand years ago, but during this time individuals have remained one of the most hardy and incredibly beautiful. In everyday life, the Akhal-Teke is called differently, some breeders call them "Golden horses", tekintsy or heavenly argamaks. All these names appeared in the close connection of the breed to a particular nationality. Then you will visit the Gokdepe fortress where was the struggle between Russian army and Turkmen tribes. After you will be transferred to the capital. You will also discover the Cultural and entertainment center Alem.