Treasures of Turkmenistan and Uzbekistan 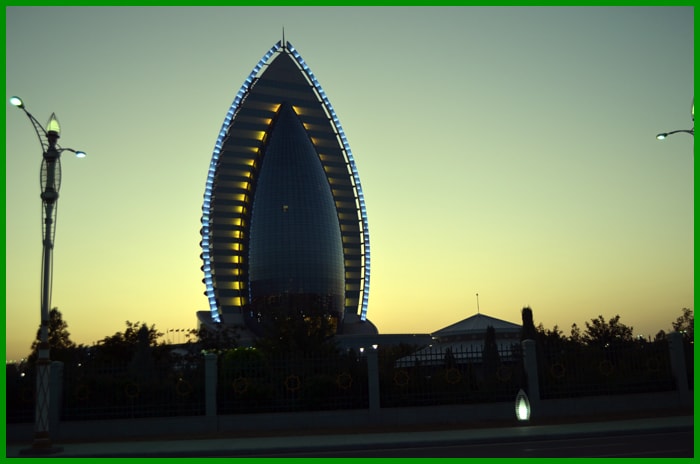 The name of the tour: Treasures of Turkmenistan and Uzbekistan

Day 1: Tashkent
This day you will meet the group at airport. After you will have a city tour in the amazing capital Tashkent. You will explore today Independence square the main attraction of the city with incredibly beautiful fountains and where celebrations are held. You will also go to the local Broadway, one of the main streets of Tashkent, which connects two beautiful squares. Afterwards you will take a ride in masterpiece of art Tashkent metro, there different stations with different architectural styles.  After you will explore the following landmarks in the oldest part of the city: Chorsu Bazaar, Kukaldash Madrasah and Hast Imam complex that includes several madrasahs, mosques and mausoleum. This day is the highlight of the excursion will be the Othman Quran the priceless ancient copy dating back to 8th c. You will spend the night in the hotel.

Day 2: Tashkent - Samarkand (morning train)
Today you will direct to railway station of Tashkent for your train to Samarkand. Samarkand is the second city in Uzbekistan (after Tashkent) in terms of territory and population. About 120 thousand people live here. He is the same age as Babylon and Rome. In course of the tour you will experience the glorious attractions: Registan square, Shakhi-Zindeh, Mausoleum Guri Emir and Bibi Khanum Mosque. "Registan" was called the main squares in the cities of the Middle East, it is a very beautiful area with an incredibly beautiful ensemble. Architectural complex of Shakhi-Zindeh included in the UNESCO world heritage list, one of the most beautiful sights. Gur-Emir is the tomb of Timur (aka Tamerlane), one of the greatest conquerors in history. Bibi Khanum Mosque after his campaign in India, Tamerlane ordered the construction of a Cathedral mosque in Samarkand. Overnight is at the hotel.

Day 3: Samarkand - Bukhara (morning train)
This day you will have a morning train to Bukhara. You will have a city tour in holy city of Uzbekistan. You will visit the first point Citadel Ark the most interesting surviving monuments of the ark - the throne room of the Emir of Bukhara, a reception for ceremonies and celebrations, symbol power and inaccessibility. After you will visit Samanids mausoleum represents the beginning of a new era in the revival and development of Central Asian culture after the Arab conquests. Further you will continue tour with Chashma Ayub, this is a somewhat unusual structure in its composition, the construction of which dates back to the XII century. A revered place, a well with a source that arose at the behest of the biblical Job. You will direct to the next point the shopping domes and Nodir Divan Begi part of the architectural ensemble of the XVI-XVII centuries Lyabi-Hauz. The madrasah was built in 1622-1623 by the vizier Nodir Divan Begi. Then you will finish tour with the last point Poi Kalon complex, the important sight of Uzbekistan. There are situated: Kalon minaret, Kalon mosque and Mir Arab Madrasah. The overnight is in the hotel.

Day 4: Bukhara - Khiva (440 km, 7 hours)
After breakfast you will have a trip to Khiva.  one of the largest and oldest urban centers of the Khorezm agricultural oasis, located in the lower Amu Darya Delta, South of the Aral sea, in Western Central Asia. The Kyzylkum desert begins here. There are many folk tales about the origin of Khiva and its name.In its heyday, Khorezm was a major center of international trade and a key point on The Great Silk Road. Merchants from the Volga region, India, and Iran came here, and trade caravans went from here to the Middle East, East Turkestan, and China. You will transfer today from Bukhara to Khiva goes via spectacular Kizilkum desert. Along the way you will see the largest river of Central Asia Amu Darya river. Night will be in the hotel.

Day 5: Khiva city tour
This day you will explore the highlights of Khiva. The tour offers you to visit Ichan-Qala, surrounded by strong walls, the historic inner city of Khiva in Uzbekistan, which became the first world heritage site in Central Asia. Fortifications and palaces, mosques and madrassas, mausoleums and minarets, caravanserais and baths built over the centuries (the most ancient architectural monuments date back to the XIV century) have turned Ichan-Kala into a unique monument city. Old Khiva became a UNESCO world heritage site in 1968. There is you can observe the prominent attractions the Kunya-Ark fortress dating back to 17th century, found by Muhammad Arang Khan, Kalta Minor minaret and Tash Khouvli palace. You will rest the night in the hotel.

Day 6: Khiva - Shavat border - Kune Urgench - Darwaza
This day you will departure to Shavat border. You will meet the group in the morning at Shavat/Dashoguz border, after you will explore the architectural monuments of Kune Urgench, Khorezm capital 10th -12th centuries. You will also experience the Mausoleum of Najm al-Din al-Kubra, Tyurabek-Khanum, Il-Arslan, Tekesh Ibn Hadzhibey, inspection highest minaret in Central Asia KutlykTimur. In the second part of the day you will transfer through the Karakum desert to Darvaza. You will have a chance to enjoy the Gas Crater. You will stay in a camp with amazing cuisine; this is fascinating place with spectacular views. People call it "Gates to Hell". You will observe the fabulous views and fascinate the nature.

Day 7: Darwaza - Ashgabat
Today you will transfer to the capital of Turkmenistan Ashgabat. You will check in the hotel and rest about 1 hour. In the second half of the day you will escort to the village of Bagir, where you can observe the Parthian Fortresses of Nisa. In course of the tour you will explore Ruhy Mosque. Then you will fascinate the Russian bazaar, Lenin square, Ertugrul mosque. In the evening you will have a city tour where you will also explore the major attractions of the capital. You will experience new parks, a huge complex with fountains and statues of the great men of antiquity.

Day 8: Flight
In the morning is transfer to the airport.

Service does not include:
- Visa
- Full board
- Migration tax
- Travel insurance
- English speaking guide
- Entrances to all museums

Note: Each Traveler should have 2 photos (5x6) to be presented at the points of entry.